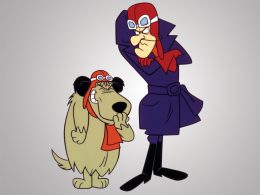 Walking through a market a couple of weeks ago, I came across an old toy replica of the General Lee from the Dukes of Hazzard.

I didn't buy it but I irritated my girlfriend no end for the next three hours with Roscoe P Coltrane quotes which gave me infinitely more pleasure :). You know the ones - We've got ourselves a hot peeeeerseeuuuute and coo coo coo I hollered gleefully as we followed an old man with a hat on, doing 35 km/h in a circa 1960 Morris Major down Main Rd, New Town.

It dawned on me then that A. if I didn't drop the redneck "Looosianna" accent soon I'd be single again and B. I've always identified with the underdog more than the hero. I don't even remember the cast of Dukes of Hazzard other than Rosco P Coltrane and Daisy (for obvious reasons!) but I could come up with Rosco quotes ad nauseum. Apparently causing nausea at the same time if the stony silence from the passenger seat was any indication.

Some of the gems that rolled off  my tongue were " Do you know who I am? I'm Sheriff Rosco P. Coltrane and when he tells ya to scoot, he means scoot. That goes for you too you little Turban Tucker" and "Oh, he is stupid! I mean, I mean even the dipsticks call him a dipstick!" Of course I made up quite a few as well in my best Southern accent but stopped when I noticed her googling Dr. Kavorkian on her phone.

Hmm where was I?, Oh that's right - underdogs.

I was always willing Wylie E. Coyote on, I mean it was a cartoon - why couldn't the bloody road runner die? - They killed Kenny every week on South Park. Dick Dastardly and Mutley - destined to forever finish second and don't get me started on Elmer Fudd, poor bugger never did get his wabbit stew!

Curiously though my favourite real life underdog was also a Roscoe - Roscoe Tanner the American tennis player with the massive left handed serve. He won an Australian Open but finished up runner up in the other majors and every other tournament of note. I was a huge tennis fan as a kid and his serve was something to behold when it wasn't coming back at him quicker than a toupee in a hurricane. Unfortunately for him McEnroe, Connors, Vilas et al were playing in the same era so he didn't get the chocolates all that often.

Perhaps if he had had a better coach..... nice segue into this weeks featured client. Marty Nidorfer - you guessed it - Tennis Coach!

We designed and printed a brochure for him a little while ago.

Check it out here