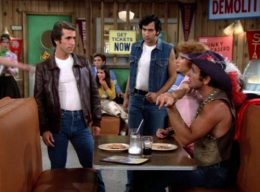 Ok, so I admit it - I was a massive fan of the Brady Bunch when I was a kid. So what if they talked funny, Greg threw a football instead of kicking it and the house was adorned with wall to wall orange shag pile carpet with olive green fixtures. (So was ours btw!) The show introduced us to blended families, which sadly are the norm these days and Mike Brady was everybody's favourite TV dad - or was he?

Challenging him for that job was the Grand Poobah of Leopard Lodge No. 462 in Milwaukee, Howard Cunningham. You see as much as I loved the Brady Bunch, Happy Days was where it was at for me. I wanted to hang at Al's diner, eating fries and drinking soda while watching Richie, Ralph and Potsie  get up to their usual shenanigans and planning some oddball caper that always ended up with Howard dispensing some fatherly advice after it had gone south.

But I wanted to be the Fonz, not the kids in the letter jackets. I wanted to pick up girls just by holding my arms akimbo, thumbs up and saying "Ayyyy" and play music on the juke box  by thumping it in the right spot to make the right record start playing. The Fonz never paid either - just got a free ride by virtue of his coolness.

Sadly I learned that such things don't happen in real life when attempting to emulate him in the games room at Swansea Caravan Park, our frequent school holiday destination. At the age of 12 saying Ayyy with your thumbs out just gets you quizzical looks from the girls at best, at worst finger pointing and outright laughter. Compounding my humiliation, thumping the juke box just resulted in a permanent scratch on ELO's Dont Bring Me Down and 24 hours banishment from the Games Room by Park Management.

My favourite episode of Happy Days though was the one featuring the Malachi Crunch, a famed demolition derby move by the Malachi brothers in which they simultaneously reversed at speed into their hapless victim from opposite sides turning them into a Malachi Sandwich. Predictably the Fonz put paid to this evil manoeuvre by pulling out of the trap at the last second, resulting in the Malachi Brothers crunching each other -  thus winning the day, the girl and my undying admiration.

As they cut to the wide shot showing the vehicular carnage I remember thinking I hope they know a good panel beater.

John Davidson at Eastern Autobody has been in the Smash Repair Industry for some time now and he and his fantastic team at Mornington are more than a match for the Malachi Brothers and their modern day counterparts.

Resilience Marketing have developed a TV commercial and Web Site for Eastern Autobody - check them out below: