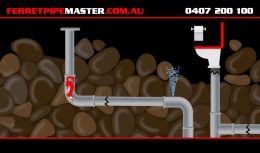 Pardon my French but this is a post about crap so it's entirely appropriate!

Now I'm no Kenny but I've seen a fair bit of excrement over the journey, in my first job as a young man I slipped over while running sales sheets at Bridgewater Saleyards and was covered in it from head to toe. To add insult to injury I was then forced to make a humiliating 4 km walk home with dried cattle manure flaking off with every step after my lift home abandoned me at Franklin Square.

Many years later I was cleaning out a rental property after the tenants did a midnight flit, opened the door to the shed in the backyard and was greeted by an avalanche of dirty nappies pooling around my ankles. The entire shed was knee deep with them, thousands of loosely covered land mines being consumed by seemingly millions of flies and insects and a stench that to this day I can't describe adequately.

There are other stories but in all honesty they're crap so let's get to the point:

Plumbing disasters and misadventures - most of us have at least one and the associated memories tend to stay with us for a long, long time.

By far and away the most unpleasant experience I've had with the old brown happened in 1994 when foolishly I decided to borrow an electric eel from a plumber mate and unblock my own drain.

Dave turned up, gave me a quick demonstration and scarpered. Years of experience right there! Left to my own devices it all started benignly enough, the eel was slowly heading down the pipe ready to cut through impediments like Homer Simpson through donuts. Nice warm summers day, cricket on the radio, pleasant thoughts of the steak we'd bbq later and a couple of beers to wash it down.

Then it hit! First was the sound, a high pitched whine, more of a distress call really. Not sure at that stage how the machine was supposed to react to the obstruction, I persevered and fed more cable as the head made agonisingly slow progress into the blockage. The whine got more pronounced, and then I got my first precursor of what was to come as material started exiting the pipe at and piling up a few feet away under the Rhododendron.

Somewhat naively I thought the eel would do it's thing, punch a hole through the accumulated matter causing the blockage, water would flow again and wash the errant material away leaving me to once again read the paper in peace on the throne. What followed was an attack on the senses so severe that Vlad the Impaler would have seen it as cruel and unusual punishment.

I'll leave the rest to your imagination - picture a mound of shiesse so big it would keep a colony of dung beetles happy for months, the accompanying smell so strong it pervaded everything and drew comments from the neighbours at every subsequent social gathering and a cable so messy that it spattered everywhere and rendered protective gloves and clothing useless. One can only dry retch so much!

I vowed then and there to never tempt the sewage gods again and whatever the cost to engage professionals for any plumbing needs I may have in the future.

Fortunately we have some great ones right here in Hobart and Sonney and the team at Ferret Pipemaster can help with blocked drains, drain maintenance and general plumbing needs all at very reasonable pricing.

Resilience have recently developed a Television Commercial and Web Site for them. You may have already seen the ad - it's hard to forget!