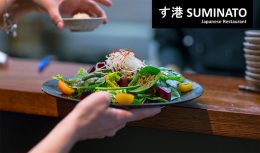 How lucky are we to live in this beautiful place? If the magnificent River Derwent on most people's doorsteps isn't enough for envious mainlanders, we then have the even more magnificent Mount Wellington or Kunanyi standing like a sentinel watching over a diverse and cosmopolitan population of 200,000 people.

It's that diversity that has come to the fore over the last couple of decades - allowing choices in entertainment and food that us children of the 70's had no idea existed.

Growing up in that era was a culinary wasteland, the local fish and chip shops and a single Kentucky Fried Chicken were the only takeaway options, and apart from a few Chinese Eateries and the ubiquitous counter meals, restaurants were nearly all traditional collar and tie affairs and mostly out of reach for working families.

As our population diversified the choices in food did as well. One of the first restaurants I frequented as a young man was an unpretentious Italian place called Concetta's in Harrington Street. Cracked formica tables, chipped and uneven wooden school chairs but man was the food good - and cheap! It was the start of a life long love affair with pasta.

Nowadays think of a cuisine and Hobart has several restaurants that cater to it. Some are so so but most are exceptional giving Hobart and Tasmania a reputation as a food and wine mecca for foodie tourists.

One such exceptional restaurant has already cemented itself as a local bucket list eatery. Suminato offers a Japanese fine dining, but informal experience in the heart of Sandy Bay. Their modern take on traditional Japanese food is a unique experience - contemporary food a thousand years in the making.

Check out the web site we did for them and then make a booking - you'll be glad you did!