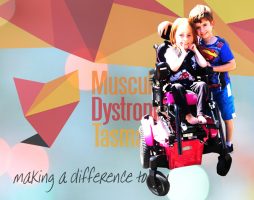 Tasmanians are a generous lot. We punch above our weight when it comes to helping those who are temporarily, or in Alexis Downie's case, permanently disadvantaged.

Alexis has Muscular Dystrophy, a group of muscle wasting diseases caused by inheriting some dodgy genes which cause the body to either inhibit proteins needed for normal muscle development or produce toxins that break them down.

One in a thousand people live with the condition under it's various guises. Some are severe, tragically taking young lives early, and some such as the type I have allow people to develop symptoms later in life and only cause mid to minor disability.

One thing is for certain - they are all life altering for the person who drew the short straw and for their loved ones.

We were approached by Muscular Dystrophy Tasmania last year to help publicise their goal of providing a motorised chair for Alexis and a vehicle which was properly fitted to transport Alexis and her chair, as well as her family.

With the generosity of the wonderful John X we developed a television commercial, created a go fund me campaign, revamped their website and negotiated with Television Networks, who were also incredibly generous, to air the commercials.

That's where you, the people of this beautiful state of ours, stepped up.

The response to Alexis and her families plight was overwhelming.

I'm getting quite emotional writing this, maybe because of my personal connection with MD, but more likely because my faith in the goodness of people has been vindicated.

The generosity of spirit, community mindedness and sense of a fair go of the Tasmanian people have allowed Muscular Dystrophy Tasmania to give Alexis's family the keys to a purpose fitted vehicle and more importantly Alexis into a life changing chair.

You've changed a life and that's no small thing.